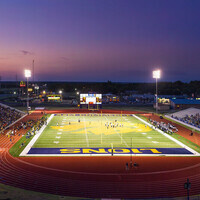 Memorial stadium was opened and dedicated on Sept. 23, 1950. The stadium has not changed radically over the 62 years it has been in existence, however there have been some modifications in the past two decades that has seen the stadium become one of the best in North Texas and one of the best in the Lone Star Conference. In 1973, a President's suite and box was added to the press box, along with 4 other rooms for viewing the game, making 5 suites in all. In the Summer of 2013, new turf was laid in that features the TAMUC Lion logo that stretches from 50 yards long and 50 yards wide. It is the largest on field logo in the nation, and possibly in the world.