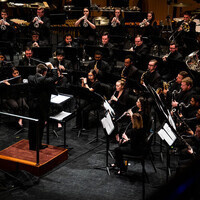 Come to the Department of Music to see and hear our talented Symphonic & Concert Band perform.