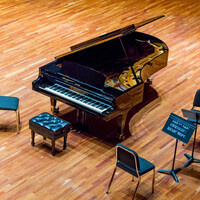 Born in Entre Ríos, Argentina, Julio began his music studies at the age of 5. He dedicated more than 10 years to popular music as a keyboardist and pianist, embracing different genres of music such as Jazz, Rock/Pop, Latin and Argentine music. His musical activities include diverse areas such as session musician, composer, arranger, producer, as well as teaching in public and private institutions. He also has performed with several international musicians such as Paquito D’Rivera, Greg Haynes, Sandoval Moreno de Oliveira, Joel Frisch, José Dávila, Thomas McCutchen and Nilsinho Amarante.

Julio is a graduate of Universidad National del Litoral (UNL) (Santa Fe, Argentina), where he earned a degree in classical piano. Following this, he attended the Berklee College of Music (Boston, MA), earning the Master Certificate in Arranging and Orchestration. During this time, he received the Herbie Hancock Celebrity Scholarship in recognition of his academic achievement. He also attended the Summer Programs at Berklee and studied piano with Neil Olmstead, Russell Hoffmann, Kevin Harris, Robert Christopherson, Utar Artun, Leo Blanco and Vladan Milenkovic. In 2019, he earned a Master of Music in Music Production at Berklee College of Music where he studied under Susan Rogers, John Storyk, Sean Slade, David Bendeth and Prince Charles Alexander.

Julio served as the piano accompanist for the Choral Institute of Santa Fe School of Music (2013-2017). In addition, he worked in the piano department teaching Applied Piano and Collaborative Piano. He served as Director of the School Extension Department (2014-2018) for UNL and taught seminars in popular music, improvisation, jazz, rock, pop, arranging and production. Since 2015, Julio was the pianist for the “Santa Fe Jazz Ensemble” Big Band, and the group “Picante Latin Jazz.” Julio worked as visiting assistant professor in the Music Department of Jacksonville State University teaching class piano, applied piano lessons, Latin American musical styles, and intro to music production. Additionally, working as accompanist for the JSU Civic Chorale, the JSU Chamber Singers and the JSU Opera Theatre. Currently, he works at Gadsden State Community College (Gadsden, AL) as an adjunct professor.

Argentinean-born pianist, Dr. Marcelo Lian has been prize-winner in several piano competitions as well as the recipient of scholarships in his native country and the U.S.

Marcelo’s appearances in solo recitals include presentations at the Teatro Colon during the Martha Argerich Festival in 2002, a recital in California playing on Vladimir Horowitz’ legendary piano, and a Carnegie Weill Hall debut in 1998 thanks to the support and encouragement of his mentor Dr. Ana Maria Trenchi Bottazzi.

Dr. Lian founded “Pianists of the Americas,” a new festival in Portland (OR). He also published an article on “Clavier Companion” on a topic related to teaching strategies, which is one of his passions.

Last February, Dr. Lian was a guest artist at the Multipiano Fest, at the National Conservatory of Puerto Rico, where he performed and taught master classes.

Upcoming engagements include performances in Texas and New York.

For more than two decades, pianist Luis Sanchez has maintained an active career as soloist, collaborative artist and teacher. He has appeared in concerts in the United States, South America, Europe and Asia.  He is currently a professor of piano and head of keyboard studies at Texas A&M University-Commerce.  Dr. Sanchez joined the Steinway Artist Roster in 2012.