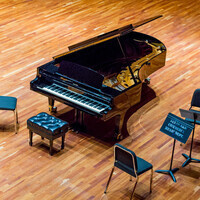 For over two decades, pianist Luis Sanchez has maintained an active career as a soloist, collaborative artist, and teacher.  He has appeared in concerts in the United States, South America, Europe, and Asia.  He is currently an Associate Professor of Piano and Head of Keyboard Studies at Texas A&M University-Commerce.  Dr. Sanchez joined the Steinway Artist Roster in 2012.

A 2011 and 2013 TMTA Collegiate Teacher of Year nominee, Luis Sanchez enjoys a successful teaching career.  Current and former students have been recipients of prizes at national and state competitions including the Texas Music Teachers Association Young Artist Competition, the National Young Musicians Showcase Competition, and The Muncie Symphony Junior Concerto Competition, among others.  Additionally, his students have been accepted at numerous summer programs including Piano Texas, Chautauqua Piano Program, Rebecca Penneys Piano Festival, International Masterclasses and Festival in Moulin d’Ande (France).  He has always thoroughly enjoyed teaching a diverse group of students from different corners of the United States as well as from China, Colombia, Venezuela, China, Bulgaria, Russia, Sri Lanka, Taiwan, Colombia, and South Korea.

Equally at home with the fortepiano and the modern piano, Dr. Sanchez pursued further studies in fortepiano and XVIII century performance practice with Malcolm Bilson, Andrew Willis, and Liv Glaser (Oslo, Norway). Most recently, he was commissioned to write an article on Phil Belt (American builder of fortepianos) for the New Grove Dictionary of American Music.

Dr. Sanchez’s CD “A Piano Recital” is available on www.cdbaby.com, www.amazon.com, and can be downloaded on iTunes.  For additional information and engagements, follow him on Facebook and Twitter or visit www.sanchezpianist.com.

Libby Vanatta, a native of Middle Tennessee, joined the music faculty at Texas A&M University-Commerce in 2010 as an Instructor of piano.  She currently teaches class piano, piano pedagogy, piano literature, and private piano lessons as well as coordinating accompanying serves for the department.  An active accompanist in Commerce, Ms. Vanatta has also performed throughout the country at conferences, competitions, and guest artist recitals.  Passionate about chamber music, Ms. Vanatta formed Doppio Movimento in 2011 with her Texas A&M University-Commerce colleague, Dr. Luis Sanchez.  The duo gives regular performances and presentations including a presentation at the 2013 Texas Music Teachers Association conference on how to use piano duets to teach other musicianship skills in regular piano lessons.

Through the various university community outreach programs, Ms. Vanatta has taught Musikgarten classes, private piano lessons, theory/musicianship classes for kids, and beginning group classes for all ages.  For eight years, she spent her summers working for Illinois Summer Youth Music camps at the University of Illinois, teaching theory classes, class piano, and music listening classes, and as a piano camp instructor.  For five of the ten years she spent teaching in the Piano Laboratory Program at the University of Illinois, she served as coordinator of the program, managing its day-to-day activities.

Designated a Nationally Certified Teacher of Music by the Music Teachers National Association, Ms. Vanatta continues to be active in the organization as an advisor to the TAMU-C Collegiate Chapter and Treasurer for Hunt County MTA.  While in Mississippi, she served on the Mississippi Music Teachers Association board as Certification Chair.  She is also a member of the National Federation of Music Clubs, National Guild of Piano Teachers, and Sigma Alpha Iota international music fraternity where she serves as Director for the Graduate Performance Awards.

Ms. Vanatta has served as an adjudicator for many events including state solo and ensemble competitions, ensemble festivals, sonata/sonatina festivals, Piano Guild auditions, NFMC festivals, and MTNA state syllabus events.  She served as an examiner during the summer of 2013 for the International Piano Performance Examination Committee in Taiwan.  In addition to administering piano examinations all over Taiwan, Ms. Vanatta also participated in a charity concert given in Tainan.

Ms. Vanatta holds a Bachelor of Science in piano performance from Austin Peay State University in Clarksville, Tennessee, and a Master of Music in piano pedagogy from the University of Illinois, Urbana-Champaign.