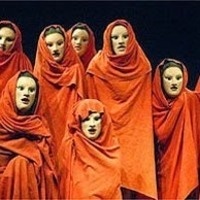 Adapted from the First Folio, Brad Dell’s Julius Caesar takes on Shakespeare’s tragic tale of conspiracy, assassination, and political divisiveness. Julius Caesar has returned to Rome, triumphant and on the precipice of gaining absolute power. Fearing the destruction of the republic under a tyrant, Cassius and his senatorial co-conspirators enlist Caesar’s friend and ally, Brutus, in their plot to assassinate Caesar. The consequences of Caesar’s assassination are riots, civil war, and mass slaughter. Julius Caesar is a political masterpiece that demonstrates the terrible price paid when corruption and absolutism destroy the very liberties the characters are trying to save.