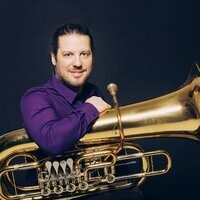 Patricio Cosentino (b. 1980 in Buenos Aires, Argentina) is the most active South American tuba player to have carved out a career as a soloist and teacher.

Since he started touring he has visited many different countries as a soloist and educator, such as Argentina, Uruguay, Chile, Brasil, Paraguay, Colombia, Mexico, Panama, the United States, Spain, France, Germany, Austria, Denmark and Italy

He is a member of the Enrique Crespo Brass Ensemble, the brass quintet Pampa Brass and the Dispar Trio.

He received his musical training at the Hochschule für Musik “Franz Liszt” in Weimar with Walter Hilgers and Stefan Tischler (2003-2009). During this time he won the DAAD scholarship.

Notably, Patricio Cosentino worked together with many South American composers to develop new repertoire for euphonium and tuba. This work has produced over 250 new pieces and arrangements from composers of Argentina, Uruguay, Paraguay, Chile, Perú, Brazil and Colombia, among other composers around the world.

In 2009, he got back to Argentina to hold the position as principal tuba of the National Symphony Orchestra and become the first tuba teacher with a University Degree in the Country.

In 2015, he presented his debut CD as a soloist. With this recording, he completed one of his personal goals, being the Complete CD repertoire of new music for euphonium and tuba by South American composers.

As a tireless creator, his eagerness to improve everything related to the development of the euphonium and tuba prompted him to create the Encuentro Argentino de tubas y euphoniums, also developing tuba mouthpieces made entirely in Argentina by luthier Marcelo Ludueña for the brand Boqar, and the music publisher, Absolute Brass.

From July 2011 – 2014, Patricio has worked together with the International Tuba Euphonium Association (ITEA), as an international representative of the executive committee.

Since 2012, parallel to his solo career, he has devoted himself to the education of young generations, appointed tuba teacher at the Brass Academy Alicante in Spain.

In 2014, during a brass band sommer camp in Germany, he is invited to be the international advisor and co-conductor of the Brass Band BlechKLANG in Jena, Germany.

Patricio Cosentino serves as an ambassador of South American music.