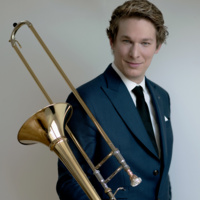 Peter Steiner has soloed with numerous ensembles around the world including, most recently, the Mariinsky Orchestra and Orquestra Sinfõnica Brasileira in Rio de Janeiro. He has had the privilege of performing the world premiers of Eric Ewazen’s “Visions of Light” (Chamber Orchestra Version) and Gilles Rocha’s “Fly or Die” with Brass Band accompaniment. He can be heard on his debut album, UNITED, which was released in January 2017 under the HELLOSTAGE Label, in collaboration with Hsiao-Ling Lin (piano) and Silver Ainomäe (cello). His second album, SAPPHIRE was released in July 2019 under the Berlin Classics label, in collaboration with pianist Constanze Hochwartner. His third album BINARY STAR in collaboration with Constanze Hochwartner was released in May 2021, again under the Berlin Classics label. His most recent release is The First Noël, a Christmas Journey – together with his duo partner.

Mr. Steiner began his studies at the Music Conservatory in his hometown of Bolzano, Italy before continuing his studies at The Mozarteum of Salzburg (Austria). In 2016 he graduated from The Juilliard School in New York City with a Performance Diploma.  His major teachers and influences include Joseph Alessi, Warren Deck, Nitzan Haroz, and Dany Bonvin.

Mr. Steiner performs exclusively on Bach Trombones - his signature is the Artisan 47XPS.