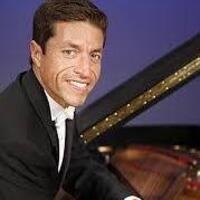 Concert pianist Gustavo Romero is internationally renowned for his exceptional technical brilliance and interpretive depth and has gained an acclaimed reputation for his commitment to an in-depth exploration of a wide variety of composers.

A native of San Diego with heritage in Guadalajara, Mexico, Romero discovered his love and gift for the piano at the age of five and gave his first public performances at the age of 10, when he also won his first piano competition. At 13, he performed with the New York Philharmonic under Zubin Mehta. Rudolf Serkin recognized his exceptional talent, and at the age of 14, he attended the Juilliard School.

Romero has won many prizes, including first prize in the prestigious Clara Haskil International Piano Competition in Switzerland, The Avery Fisher Career Grant and The Musical America Young Artist Award.

For the past 20 years, Romero has performed a summer series of concerts in La Jolla, California, sponsored by the Athenaeum Music and Arts Library, featuring the music of one composer each year. He has presented the works of Chopin, Bach, Schumann, Schubert, Brahms, Mendelssohn, Haydn, Händel, Liszt, Debussy, Gershwin, Ravel and Rachmaninoff, the complete piano sonatas of Beethoven and Mozart, the complete four-hand and two-piano works of Mozart and Clementi and piano concerti of Mozart, Beethoven, Haydn and Mendelssohn conducting from the keyboard.

In the 2017/18 season, Romero focused on the piano works of Enrique Granados, celebrating the 150th anniversary of his birth. Concert tours in 2017/18 include Italy, United Kingdom, Ireland, Vietnam, Taiwan, South Africa and the United States.

In the 2019/20 season, Romero will present the complete Beethoven Sonatas in celebration of the 250th anniversary of Beethoven’s birth. This complete cycle of 32 Sonatas in seven concerts will be presented in the U.S., Europe, Asia and South Africa.