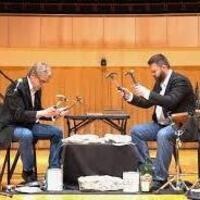 The Innocents was originally conceived by Allen Otte and John Lane as a performance art piece in collaboration with Cincinnati director Michael Burnham and a group of actors from the Cincinnati College-Conservatory of Music Drama Program, which complemented an exhibition of photography by Taryn Simon, The Innocents, at the Cincinnati Contemporary Art Center.

In the year 2000, photographer Taryn Simon traveled across the US photographing and interviewing individuals who had been wrongly convicted and served time for crimes they did not commit. The individuals photographed were exonerated through DNA evidence, some after serving as many as 18 years in prison. In most cases, mistaken identification was the primary cause of wrongful convictions. Simon photographed the men at sites that had particular significance to their conviction: the scene of the crime, arrest, or the scene of the alibi. The Innocents, which is the resulting collection of photographs, have been exhibited internationally and featured in numerous publications, including The New York Times Magazine, and Vanity Fair. In these photographs, Simon confronts technology's ability to blur truth and fiction. In the cases and subsequent lives of the Innocents, this quality of technology had profound consequences.

The enormity and weight of the images and words of those individuals compelled the artists to create and to perform. From the larger performance art piece, which included movement, music, spoken word, and drama, we have distilled music and words into an ever-expanding concert work. Through the use of non-traditional instruments, such as found or street percussion (rocks, pots, pans, trash cans, etc...), African mbiras/kalimbas, and the use of electronics, the music and text illustrate some of the strong and complex emotions brought about by Simon's original work. The music is broken into short continuous movements: each deals with a particular issue. For instance, in Transformation the use of processed electronic sounds illustrates two key concepts, technology's ability to blur truth and fiction and mistaken identity, by taking the sound of one voice and transforming it to another.

Music from The Innocents was recently featured on the DVD "In Their Own Words," released through the Innocents Project. The Innocents has been performed in various venues including the Cincinnati Contemporary Arts Center, University of Georgia (3-day Interdisciplinary Residency with new music ensemble Bent Frequency), Georgia State University, the Center for Civil and Human Rights (Atlanta, Georgia), Sam Houston State University, and the Percussive Arts Society International Convention in Indianapolis, Indiana.