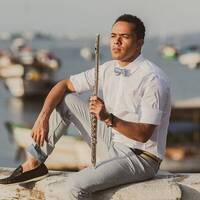 Andreas began his musical career in Brazil, where he studied at the University of Brasília and then completed his Bachelor’s Degree in Flute Performance at the Brazilian Conservatory of Music, under the guidance of French Professor Odette Ernest Dias. Andreas also received a Graduate Diploma in Chamber Music at the same institution being mentored by British cellist Sr. David Chew, and studied in parallel with Cláudia Ribeiro do Nascimento (OSESP) and Michel Bellavance (Conservatoire de Genève).

As a soloist of the Brazilian Marines Wind Symphony, Andreas performed in major concert halls throughout Brazil and other countries of South America. As a chamber musician, his concerts with Trio Gaubert (cello, flute and piano), took place in theaters and museums throughout Rio de Janeiro. Andreas received numerous prizes at competitions in Brazil including Young Soloists of the Eleazar de Carvalho Festival and the Sargent Borges Medal, granted to the leader of the Sergeant Musicians Course of the Brazilian Marine Corps. He also received a full scholarship to pursue his master's studies in flute in the USA, awarded in Brazil by the Young Musicians in the Museum Competition in partnership with James Madison University in Virginia.

Andreas has appeared in recitals, concerts and presentations throughout the US, including the Global Brazil Conference at Duke University, Symposium on Brazil at Johns Hopkins University, and recent concerts in Nashville, Washington, New York City, Rochester, Boston and Seattle, among other cities. After being invited to perform as Principal Flute with the New England Symphonic Ensemble at Carnegie Hall in NYC (2016-2019), Andreas gave a solo performance in 2019 together with fellow CAI Virtuoso Competition winners.

Andreas was also appointed as a Trevor James Alto Flutes Artist, selected to be a member of the 2019 Global Leaders Program, and awarded the SphinxConnect 2019 and 2020 Fellowship and a 2020 Sphinx Orchestral Partners Auditions Fellowship. Andreas is also an Artist in Residence with Sugar Hill Chamber Music series.

Andreas has been an active performer throughout the U-S, and his debut album Beyond Bossa Nova has been received with great acclaim to all audiences in the US and other countries. His most recent performances include being a guest flute with the Seattle Symphony Orchestra and the Kennedy Center Honors Concert Orchestra. Andreas is currently based in New York, where he dedicates his time to performing, teaching, and discovering works written by lesser-known and historical composers, whose works have rarely been heard, and express extreme ranges of emotions and demands tremendous virtuosity.