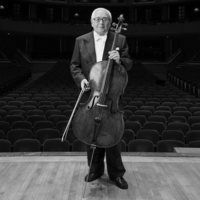 Russian-born cello virtuoso Yuri Anshelevich made his recital debut at the age of nine. Five years later, his prodigious talents won acceptance at the famed Moscow State Conservatory and he graduated from that institution with highest honors. That same year he received First Prize in the Cello division of the All-Russian Competition and studied with world-famous cellist Mstislav Rostropovich. Since then, Anshelevich has won worldwide critical acclaim for concert and recital performances. Recently retired as associate principal with the Dallas Symphony Orchestra, Anshelevich is often described as a performer of power, imagination and vitality.