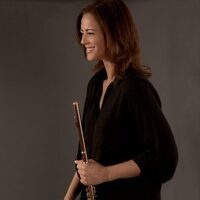 Hailed as “a deft, smooth flute soloist” by the New York Times, Jennifer Grim’s remarkable depth and breadth as a performer of solo and chamber repertoire has gained broad national acclaim. First prize winner in several national chamber music competitions, Ms. Grim has performed with such renowned ensembles as the Chamber Music Society of Lincoln Center and St. Luke’s Chamber Ensemble. She is the flutist of the award-winning Zéphyros Winds and the New York Chamber Soloists. Other solo appearances include the Caramoor, Aspen, Norfolk and Skaneateles Chamber Music Festivals.

Grim has been a featured soloist at the Vermont Mozart Festival and collaborated as a chamber artist with pianists Menahem Pressler, Anton Kuerti, Charles Wadsworth, Philippe Entremont and guitarist Eliot Fisk. At the invitation of Maestro Entremont, she was appointed Principal Flute of the Santo Domingo Music Festival Orchestra.

Highlights of recent seasons included performances of the Nielsen Flute Concerto with the Lviv Philharmonic (Ukraine) and Mozart Flute Concerto No. 2 in D major with the UNLV Symphony Orchestra, Henderson Symphony Orchestra and the Vermont Summer Music Festival. Other noted performances include an appearance as soloist in the Mozart Concerto No. 1 in G major with maestro Philippe Entremont and the Boca Raton Symphonia, and guest artist performances with the Boston Chamber Music Society and the American String Quartet with harpist Nancy Allen.

A native of Berkeley, California, Grim holds a Bachelor of Arts degree from Stanford University and Masters and Doctor of Musical Arts degrees from Yale University. She is currently Associate Professor of Music at the University of Nevada, Las Vegas and Artistic Director of the UNLV Chamber Music Series.