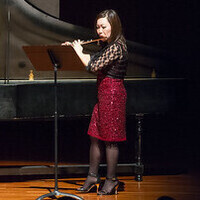 A native Houstonian, flutist Julee Kim Walker remains an active performer and pedagogue in the Dallas-Ft. Worth metroplex. Prior to her position here, she held teaching positions at Southeastern Oklahoma State University, Grayson College, Eastfield College, and the University of North Texas. She is Artistic Director of the annual Texas Summer Flute Symposium.

Recent engagements include a Texas tour with the Texas Guitar Quartet, a performance at the World Saxophone Congress in Zagreb, Croatia, and recitals and masterclasses in Shanghai, China and Buenos Aires, Argentina. Overseas, she was flutist for the Austrian American Mozart Academy Opera Festival in Salzburg, Austria for four seasons, and also performed as Principal flutist with the Franco-American Vocal Academy Opera Festival in Perigueux, France, and the Red River Lyric Opera Festival in Wichita Falls, TX.

An esteemed teacher, Dr. Walker was the 2016 and 2020 recipient of the Paul W. Barrus Distinguished Faculty Award for Teaching, and is sought-after as a clinician, adjudicator, lecturer and masterclass teacher all over the world, including at the University of North Texas, CU-Boulder, Florida State University, Shanghai Normal University in China, University of Talca in Chile, and the Guri Project in Sao Paulo, Brazil.