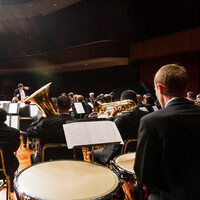 Come to the Department of Music to see and hear our talented Chorale & Wind Ensemble perform.

The Texas A&M University-Commerce Chorale is the University's premier choral ensemble selected by audition from undergraduate and graduate students in the Department of Music and the campus at large. The Chorale sings a wide range of substantive literature from all musical periods. In addition to a full schedule of on-campus performances, the Chorale has appeared in convention concerts, workshop presentations and choral festivals as well as tours within the United States and Europe. Under Dr. Hooper's direction, the Chorale has performed in concert in Carnegie Hall, as the guest American choir at the International Music Festival of Campina Grande, Brazil, toured France performing in Le Madeline Church, St. Sulpice Church and a special concert at the American Cemetery at Omaha Beach in Normandy and toured Austria with performances in the Mozarteum in Salzburg, at the University of Vienna in Vienna and the St. Andrae Parish Church, Mirabellplatz in Salzburg. In addition, in 2019, the University Chorale was invited to perform for the Texas Music Educators Association Convention.

The Wind Ensemble is the premier large instrumental ensemble at Texas A&M University-Commerce. Comprised almost exclusively of undergraduate and graduate music majors, the Wind Ensemble is equally dedicated to the performance of the cornerstones of wind literature, the finest contemporary works, and a rich and varied repertoire composed for chamber winds. Led by Phillip L. Clements, Director of Bands, the Wind Ensemble continues to be at the forefront of new music for wind band, consistently commissioning new works from the nation’s leading composers. Featured and guest composers have included David Maslanka, James Syler, Steven Bryant, John Mackey, David Sampson, Bradley Bodine, Michael Daugherty and James Stephenson. The Wind Ensemble has performed at numerous conventions of the Texas Music Educators Association (most recently in 2018) and the College Band Directors National Association. Additional performances have included Carnegie Hall and a ten-day concert tour of Germany and Austria (2016). The Wind Ensemble’s most recent recording projects include Convergence (2013) and Traveler (2017).